As part of the New Theatre in your Neighbourhood project Fuel have been inviting artists to undertake missions to each of the places that we are working in. As part of their mission they will be contributing to this blog. We are delighted to present this mission blog post from Alan Lane.  You can find out more about the New Theatre in your Neighbourhood project at http://www.fueltheatre.com/projects/new-theatre-in-your-neighbourhood

There comes a point when you are driving through Jaywick when you realise that it is no longer what can realistically be called a ‘road’. It’s something else, not a track so much but definitely not a road.

But that point is not precise, it just happens and then you realise.

On your way out, you think to yourself, you’re going to pay attention and find the exact moment when the road becomes a ‘non-road’ and maybe take a photo of it. And yet you’ll find yourself in the centre of Clacton-on-Sea without having found that precise moment and definitely on road again.

In Clacton-on-Sea there is money, real money. Not huge wealth (that’s further up the coast) but there is real money. And there are spots in deepest Jaywick where there is no money. Not comparative poorness but an actual complete lack of money. But there isn’t a single moment where you can say, here. Here is the moment where one becomes the other. It’s an almost perfect, smooth sliding scale.

It is a place of old diesel Land Rover Defenders. A place of old boats refurbed as plant pots. Of confederate flags flying on lanky flag poles. A place where everyone seems to have a dog or a mobility scooter, and sometimes both. A place where every other building is abandoned with the glass put through but the inhabited ones have their doors not only unlocked but also open. It is a place where people don’t want to bother with your bullshit anymore. It’s off-grid. Not literally perhaps but in all the ways that matter.

I sling the van in the Jaywick Community Centre car park and take a walk around. The houses all around the top end have been burnt out. It’s bleak, feels abandoned. But I know it’s not abandoned, there’s pride here, this I know from before and what Jordana told me earlier. 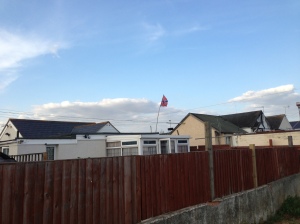 There’s a confederate flag fluttering above the house at the end of the football pitch I want to take a picture of. My phone is out and click, photo taken.

Behind me a man explodes, louder than you can imagine. “What the fuck are you doing?” He is on the other side of the pitch but approaching fast. He’s as big as I am, wearing a bright red boiler suit open to the waist. It’s like someone has taken Rooster from Jerusalem and smacked him around the face with a bat. He’s still coming, still roaring.

The little I’ve learnt from rehearsing on city streets for a while now is you always walk towards the screaming man. Although the temptation to run in the opposite direction is strong, realistically I am not fast anymore and there is only (genuinely) one road in and out so running is not wise.

“What the fuck are you doing?”

‘Taking a picture of the flag’ as loud as him but not as angry.

“My mum lives in Georgia now and she’ll like that there is that flag in the town her parents used to live in.” Less loud.

‘Oh that is fucking fine mate. Fucking fine.’ We’re friends now it seems, it all happened quick. He’s drunk but no less pleasant for it.  He has an old US Army Jeep. Up on bricks but still a nice car if you like that sort of thing which I do. He has a van out the front that is covered in camouflage. It makes me laugh.

He doesn’t get why.

“If you’re hiding from the satellites mate you need to wear less bright boiler suits.” He’s cuddling his dogs now, talking to his neighbours. No one seems bothered by me now, the idiot that turned up 15 minutes ago in a bright yellow transit van in a town with one road in or out. I go down to the shore.

There’s 3 lads stood waist deep in the sea. Dad is stood knee deep trying to encourage their border collie to come in. He’s far too wise to swim in this soup of god knows what. “Come on Harry, Come on” the dad shouts. Dog barks back. ‘Dad!’ shouts the eldest brother. “What?” ‘Liam’s pissed in the sea.’ The dog barks.

They are sat in their mobility scooter outside their beach house, something’s not right.

“We did,” she explains. “Not now. We got his scooter stuck in the sand.”  She nods to him. They are both 70 odd, she’s decked out in yellow gold, he’s all big hands with longer nails than you expect from a man, especially this man; hands that used to work hard but now don’t so there’s a kind of pride in the longer nails I think. Like the hands my granddad had.

“There was no one around. We had to dig the wheels out ourselves. Us! We did it though.” He beams at me. He’s no-one’s fool, he’s still sweating from the effort of it all.

“It was because we’d done the big shop. Pop, a few bottles of it and milk, a big 4 pinter. Weighed us down, didn’t it. And then we sank in the sand and got stuck.” She is laughing now because it turned out all right.

“Well I’m glad it all turned out okay” I say. I turn to go but change my mind. “Do you mind if I ask, is this place nice? I’ve just arrived, half an hour ago and I wondering whether it is nice?”

“The best” he says, certain.

How long you been here?

“Ten years. The most perfect ten years.” He says, she nods.

I look at the two room hut that is their house, fifteen yards from the beach. Do you not get stuck in the snow on those things I say, nodding at the mobility scooters.

“Ten years we’ve barely had any. Colchester they get a lot more snow. But not here.”

It’ll be the wind off the sea I say.

“It will be that” he says “Look at that sea” The sun is orange and bouncing off the water. It doesn’t look like Essex.

Where were you before I ask but I know the answer.

Good Evening I say and bugger off. I had to actually stop myself from hugging them as I left. We talked like we were old friends.

On my way back I pass their house with their scooters outside. He’s left his wallet in his basket. I assume he’s done it on purpose, he’s no one’s fool.