As part of the New Theatre in your Neighbourhood project Fuel have been inviting artists to undertake missions to each of the places that we are working in. As part of their mission they will be contributing to this blog. We are delighted to present this mission blog post from Matt Steer.  You can find out more about the New Theatre in your Neighbourhood project at http://www.fueltheatre.com/projects/new-theatre-in-your-neighbourhood

Arriving into Poole on the train promises much, glorious sunshine beats down on a beautiful harbour, water is lapping, birds are flying, boats are boating and windsurfers are showing off. I think about how many times i actually came here in my childhood. (I grew up 15 miles east of here on the Hampshire/Dorset border.) Definitely three.

There wasn’t much appeal I seem to remember apart from Splashdown at Tower Park – that accounts for two visits – or a futile search for the red squirrel (still not convinced it actually exists) on Brownsea Island – that’s the other. Basically everything Poole had was replicated somewhere closer: Bournemouth had its own version of Splashdown (and with a wave machine no less!); Christchurch had a harbour and boats and show-offs; and Hengistbury Head didn’t have red squirrels either.

Only when I started board-treading did the Lighthouse (a shabby Poole Arts Centre back then) arrive on my map. So stopping off at the old gal on tour with Will Adamsdale’s ‘The Victorian In The Wall’ was hardly exciting or like ‘going back home’ but it felt like…something.

Exiting the station brings a slightly different view from that of the harbour: a car park, a flyover, lots of concrete. Hmmm, lets walk along this main road for a bit then. Oh, whats this, a subway that’s very reminiscent of a harrowing scene in a disturbing film I wish I hadn’t seen. Let’s try the other way. Oh, what’s this, a massive and incongruous hunk of a building that must’ve taken a wrong turn somewhere in Eastern Europe and finally given up its travels on the edge of the George roundabout. Poole is weird. I’ve decided.

Two shows in the studio at the Lighthouse go well and there’s a post show salon event too that goes off better than any post show thing I’ve ever been involved with. Perhaps it was the 12ft table of nibbles on offer. (I laid down next to it, it was two me’s.) And before you can say ‘what happened to the nibbles?’, it is Sunday morning and our time here is done. Except for one thing. Rain? Check. Headache? Check. Awkward  luggage? Check. LET’S HIT POOLE.

Within moments I conclude that this area of Poole isn’t designed for pedestrians. It’s designed to be driven through on the way to somewhere else. The Lighthouse, the largest arts centre outside London, is situated opposite the bus station and the Dolphin Shopping Centre on the busy  Kingland Road. Hardly ideal for tempting pedestrians in with promises of weird and wonderful tales or a tea cake (in the rather pricey cafe/restaurant). I do worry about the location and physical appeal of arts venues and am often concerned that a venue isn’t helping itself by its location and its looks. Not that it has much say in either. Needless to say I am now worried about the Lighthouse. Even though both our performances sold out in the Studio and they seem to be doing just fine with a varied programme of touring theatre, music, film, dance, comedy and sizeable support from the Arts Council.

I take to the subway from the other day/that film. I take a picture then run. Cool picture actually. I look up and in front of me stands the lost hunk of building. Turns out it’s Barclays House and from this angle looks pretty beautiful. I take a picture. Cool. The rain has cleared, my headache has been paracetamoled and Poole and I, I think, can be friends. Next stop, the Quayside. 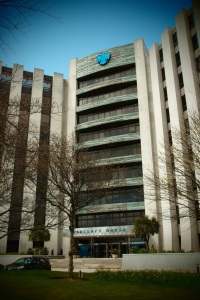 I walk the High Street. It was probably quite quaint and pretty once. Now its home to all the usual suspects, some rather unappealing pubs and of course a cheap bakers. But at least it’s pedestrianised. So I zigzag irresponsibly whilst eating my 90p sausage roll. Now this is living.

I head to the Tourist Information Centre on the Quayside which is wall to wall colourful leaflets promising sea safaris, theme parks, outstanding natural beauty, red squirrels. Poole has a lot going down, I’d never quite realised. A tall pile of flyers for our show sit prominently on the side. They either had an absolute shed load to begin with or no one took one.

I am reminded that Poole is one of the largest natural harbours in the world; that Brownsea Island is owned by the National Trust and was where Baden-Powell began the Scout movement; that the RNLI are based here; that Poole Pottery is famous; that Sandbanks is amongst the priciest real estate in the world; that Sunseeker make all their fancy boats here; that the coastline is known as the Jurassic Coast; that the Royal Marines train here; and that the Poole Pirates speedway team have historically been very very good. I feel guilty as I don’t think I’ve given Poole a fair crack of the whip over the years. I also wonder how the arts can compete with all this good stuff?

I think back to the post show discussion. The crowd that stayed behind were all at least late 30’s I would say, mostly in couples, and a good few had travelled in from the surrounding areas (Wimborne, Christchurch, New Milton). They asked probing questions about the process, suggested ideas and provided constructive criticism. Basically they were into it, they dig this kind of thing. I wonder whether anyone from Poole itself comes to theatre at the Lighthouse? Whether they know there is such a great facility right by their bus station? I wonder what the school group of 11 year olds who came made of it all? And where they came from and why? I don’t know any of the answers. So of course, I worry. And I realise my headache has returned as a result of all the thinking so step outside for some good old-fashioned sea air. I duck a seagull who has no respect for personal space. I take a picture of a cool bit of rope and some water. And sit.

I am confused by Poole. It seems to have no centre, it’s all rather dispersed, and yet it apparently offers so much. The Quay and the harbour I guess is where people gravitate to, (it’s certainly busy today on a not particularly pleasant Sunday morning) but this doesn’t help the Lighthouse as it’s in the opposite direction. The many pubs along the front seem to be doing good business though.

If I was to create a piece of work here, I would want it to appeal to the people of Poole, not just those who drive in for their culture fix then drive away again. Perhaps I would explore the history of the place: Poole was as an iron age settlement after all, a bustling 12th Century port, an important trade link to North America and a key player in the D-Day landings. And now it is a main ferry route to the Channel Islands and France, and has a large tourist industry. Everything it has and does is linked to the sea, which is why it came to exist in the first place.

I would talk to those school children and find out what Poole is to them, what they see themselves doing and will they even stay in the area? What relevance is it to them that Sandbanks is one the most exclusive addresses in the land, that the fanciest boats are built here or that the whole area is of ‘outstanding natural beauty’? Do they even like the sea?

I would like to find out what life is like in Poole away from the Quayside and the tourism and the glamour and I would interview a whole host of residents and workers and find the stories one would never otherwise hear. And I would explore further the confusion in my own mind: that away from the water, where Poole seems to have everything, it doesn’t appear to have much at all. I’d want my piece to appeal to the people of Poole itself and to see new faces coming to the Lighthouse.

And if none of that gets me anywhere I’d send Will Adamsdale back in and get 12 feet of nibbles out. That seems to do the trick.